Galileo and the Leaning Tower of Pisa

For example, drop at the same time a stone that has a mass of 1 kg and a stone with a mass of 10 kg. 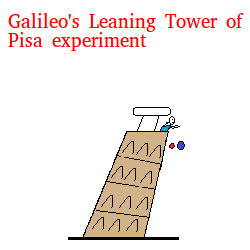 However, this is not what the experiment revealed. If air resistance is very small, both stones will hit the ground at practically the same time.

This means that both stone had the same acceleration.

Galileo made the discovery, but he did not know why the accelerations were the same.

Newton's second law of motion can help us to see why the accelerations are the same for both stones with a simple calculation.

We can compute the acceleration of each stone. We will need the weight to do so.

The above calculation shows that the acceleration is the same and it is g even though one of the stone has a mass that is 10 times bigger than the other.

Galileo and the Leaning Tower of Pisa: Air resistance

In reality, the bigger object will reach the ground a little sooner. That is why we said earlier they will practically hit the ground at the same time.

The heavier the object, the more the object will resist air resistance.

Air resistance though builds up quickly on the lighter object causing the object to reach its terminal speed soon enough.

However, because the heavier object can resist air resistance better than the lighter one, it will be slightly ahead of the lighter one until they both reach the ground.

That is why the heavier object gets to the ground a little sooner. However, we are talking about a time difference of only a split second and a split second may not be noticeable in most cases.

The experiment by Galileo from the Leaning Tower of Pisa clearly shows that a heavier object will not reach the ground a lot sooner than the lighter one.