Buoyant force is the force that pushes object up when the object is submerged in water. What is buoyancy? Most of us have experienced buoyancy before.

Why is the object less heavy? It is the result of pressure acting against the object.

For example, submerge a rock in water and then try to lift it. The rock will of course be a little easier to lift since the weight is less.

The figure below shows the forces acting on the rock with red and blue arrows. 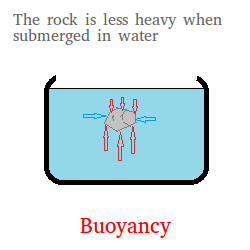 The forces (shown with blue arrow) acting horizontally on the left and on the right cancel each other. As a result,  the rock will not move sideways.

However, the forces acting vertically do not cancel each other.

Buoyant force and the volume of object

When you submerge an object in a container, the water will rise. The volume of water that rises is equal to the volume of the object that is now under water. 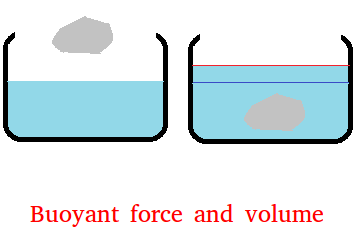 This makes sense since when the object is under water, it has to occupy some space. It basically takes the space of the water that is displaced or pushed aside.

Be careful! It is not about how heavy the rock is. It is about how much space it takes inside the container. The more space it takes, the more water will be pushed aside.

If you are still having a hard time understanding this, do this experiment:

1. Get a plastic cup and fill it with water.

2. Get another empty plastic cup.

You should notice that most of the water came out.

The amount of water that came out is equal to almost the entire  volume of the cup.