Difference between population and sample

Therefore, it is important to understand the meaning of these two words and the difference between them really well.

What is a population?

Suppose a statistician is trying to find out the following: 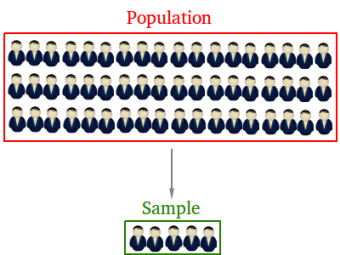 The population is the entire set of students, mothers, Toyota Camrys, or companies.

The population for the above examples is

As you can see, the word population does not refer to just people. It could refer to people or things such as books or cars.

A population is the set of all elements in a statistical study .

In reality, you may never be able to get in touch with every single mother living in the USA or every single company around the world.

You may not even be able to contact half of all mothers or even one-tenth of all the companies around the world.

This is where sampling or taking a sample is important.

What is a sample?

Since it is not always possible to get in touch with all members of a population, research is usually done with only a portion of the population.

For example, a study to find out how many mothers breastfeed their children could be performed with just a few thousand mothers.

A sample is a fraction of the population.

In 2009, the estimated number of mothers in the United States was about 85 million.

Suppose you pick 10 thousand mothers to find out who breastfeed their children.

Suppose you want to know the prices of all Toyota Camrys sold in the USA. There is lots of data here since even if you focus on one single company, the prices may vary a lot.

In some cases, it may be quite possible to get in touch with every member of the population.

Of course, your population will have to be small in number. Say for instance a school has 5000 students.

With some good planning and organization, you may be able to get in touch with all the students in that population.

As a summary, here is the difference between population and sample

The population is the set of all elements while the sample is a subset or a small portion of the population.

Difference between population and sample quiz