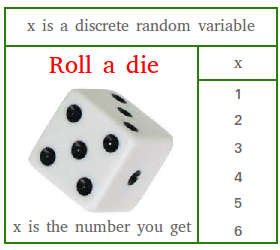 A random variable is a variable that has exactly 1 numerical value and this value is determined by the outcome of a random experiment.

Let x be the number of vehicles owned by someone selected randomly. Then, based on our result, x could be 0, 1, or 2.

Since the value of x depends on the outcome of a random experiment or asking people randomly, x is called random variable or chance variable.

What is a discrete random variable then?

Why are the values countable? It is because we can count them : 0, 1, and 2. There are 3 different values and we were able to count without any problems.

Other examples of discrete random variables

Notice that the number of customers visiting the store will give distinct values. The number of people visiting could be 0, 1, 2, 3, 4, 5, ... and once again we can still count.

In our example above about number of vehicles someone owns, we found 3 distinct values {0, 1, 2}. This is easy to count since we are dealing with a finite number of values.

A random variable can still be discrete with infinitely many values as long as we can count these values or create a list.

For example, Let x be the number of customers visiting a store forever and ever

This list is very very big, but the list is still countable if you could live forever. This will of course take you forever and ever to count, but you will be able to count if you never die!