The electrostatic force also called electric force or electrical force is the force of attraction or repulsion between two charged objects or particles.

To calculate the electrostatic force, we can use the formula you see below known as Coulomb's law.

The formula is named after Charles Augustin Coulomb who did some experiments that led to the formula. 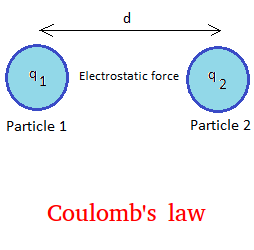 d is the distance between the charged particles or objects.

q1 represents the quantity of charge of one particle.

q2 represents the quantity of charge of the other particle.

k is called the proportionality constant or electrostatic constant.

Notice that in Coulomb's law, we take the absolute value of the quantity of charge. This is important since the charge of a particle or object could be either positive of negative. The sign just tells you how the particles will behave.

If the charges have the same sign, the force is repulsive.

If the charges have different signs, the force is attractive.

However, when doing the math, the values of the charges must be positive.

The SI unit that we use for the electrostatic force is the Coulomb.

Be careful! The Coulomb is not the charge of a single electron.

1 Coulomb is the charge of approximately 6.24 quintillion electrons.

In other words, it is the charge that goes through a 100-watt light bulb in 1 second.

It makes sense that 1 coulomb could not be the charge of just 1 electron.

Charles Coulomb could not do his experiment with just 1 electron. It is way too small! He had to experiment with something he can touch. And if you can touch it, it is made with billions and billions of electrons.

Similarity and differences between electrostatic force and gravitational force.

Interestingly, Coulomb's law has the same format as Newton's equation for the gravitational force between two particles.