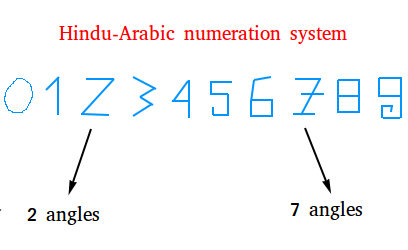 The following lists 4 main attributes of this numeration system.

First, it uses 10 digits or symbols that can be used in combination to represent all possible numbers.

Second, it groups by tens, probably because we have 10 fingers on our two hands. Interestingly enough, the word digit literally means finger or toes.

10 one thousand are replaced by 10 thousands, and so forth...

Third, it uses a place value.

Finally, the system is additive and multiplicative. The value of a numeral is found by multiplying each place value by its corresponding digit and then adding the resulting products.

Each Hindu-Arabic numeral has a also word name. Here is short list: