Impulse and momentum are closely related as we shall see in this lesson. Recall that momentum = m × v,  where m is the mass and v is the velocity.

In order to change the momentum of an object, we can either change the mass or the velocity.

So far, we see that force is important to change the momentum of an object.

There is something else that can change momentum. Which situation do you think have more momentum?

Situation 2:   A force is applied for 20 seconds

Thus, to change the momentum both the force and the time are important.

We can now define what impulse is in physics. Simply put, impulse is the quantity force × time.

We can write this as an equation as shown below.

F is measured in Newtons and t in second.

The unit of impulse is N.s

Difference between impulse and momentum

Whether you fall on a mattress or a concrete, your momentum will equal to zero when you hit the mattress or the concrete.

Your momentum though is still decreased by the same impulse. 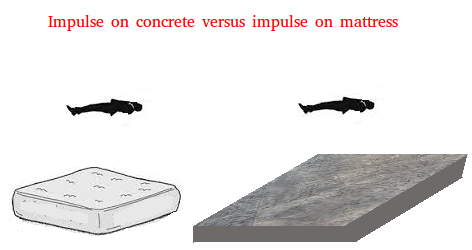 When you hit the mattress, the force of impact is reduced as you increase the impact time or the time your momentum is brought to zero.

On the other hand, the concrete floor will stop you abruptly. In other words, the impact time is very short. As a result, the force of impact is more severe.