Definition and examples of inertia

Isaac Newton is the one who formulated a great definition of inertia. Also known as Newton's first law or law of inertia, Newton restated Galileo's idea. Below is what Newton said in simple terms:

If an object is already moving, it will keep moving in a straight line at constant speed unless a force stops it.

If an object is at rest, it will remain at rest unless a force moves it.

This was an important discovery because Aristotle believed that if an object keeps moving, then some force is being applied to it.

Aristotle did not say that an object can start moving on its own.

He believed that force must be applied to get something to move.

However, he also believed that as soon as this force is removed, the object will seek its natural state that is rest.

This view of motion was accepted for about 2000 years until Galileo challenged it with an experiment.

Galileo used the two planes you see below. Then, he rolled a ball down the incline. He noticed that the ball will continue to move until it reaches almost the same height on the other side. The less friction there is on the plane, or the smoother the plane is, the higher the ball will move to reach nearly the same height. 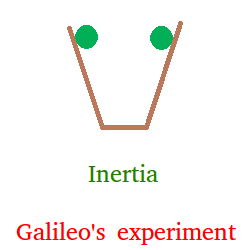 This is interesting because when the ball reaches the bottom of the incline, there is no more gravity to keep the ball moving.

The ball thus kept its natural state of motion.

The second experiment is similar to the first one except that the other plane is longer and the plane is inclined at a smaller angle. 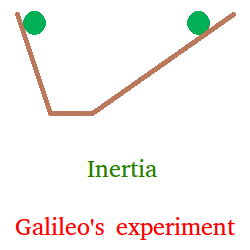 The ball still nearly reached the same height, but this time traveled a longer distance.

What if the other plane was completely horizontal?

Again, in the absence of friction, the ball will keep rolling with a constant speed.

The ball will not come to rest as Aristotle said.

A great example of inertia is when somebody is not wearing a seat belt while driving. The car collides with a tree and the person flies.

The body was just trying to keep the same speed before impact.

Now you know why you should always put your seat belt. Inertia could kill you.

A solid definition of inertia

In the absence of forces or friction, an object already in motion will keep moving indefinitely.

An object at rest remains at rest unless a force is applied to the object.

If you are taking a physics class, you teacher may use an air table to demonstrate inertia to you and your classmates. An air table has many tiny holes where blasts of air are coming out. It does not reduce friction completely, but reduces it tremendously.

Take the Newton's first law quiz to see how well you understand the first law of Newton. After completing this quiz with 100% accuracy, you will know exactly what inertia is . You will not need to use a paper and pencil to complete this quiz.

First, read this lesson about Newton's first law and then take this quiz.