Modeling multiplication of integers with number counters is the goal of this lesson.

The number counters are shown below.

A few examples showing how modeling multiplication with counters work

For some of the models, you will see how the concept of repeated addition can be used to do the modeling of multiplication. 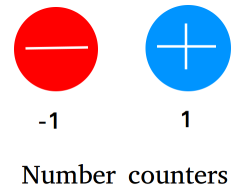 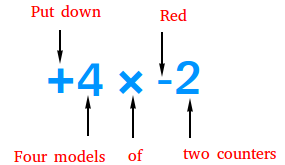 Since there are 8 red counters now and they are all negative, the answer is - 8.

In some cases, as opposed to adding counters, you will need to take out some counters. The last example is particularly interesting and will show how to do this. 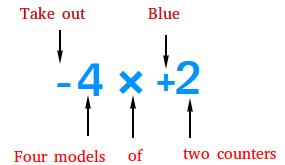 So far though you do not have any blue counters to take. Therefore, you need to put it down. The way you do that is by putting a zero down. The zero will have 8 blue counters and 8 red counters. 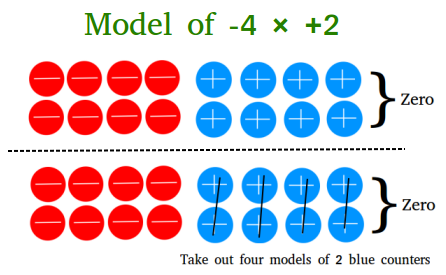 Notice that by putting a zero down, you are not changing the problem since a zero is nothing.

Again, did you notice the following?

After removing the 8 blue counters, you are left with 8 red counters. Therefore, the answer is -8.