Momentum and collisions are closely related in physics as you will clearly see in this lesson. Collisions occurs of course when objects collide. To keep things a little simple, we will focus on the collisions of two objects in this lesson.

How are momentum and collisions related?

The law of conservation of momentum is the law that relates or brings together momentum and collisions.

The law of conservation of momentum

Therefore, the following equation is law of conservation of momentum:

What are elastic collisions?

When a collision occurs between two objects and the objects are not permanently deformed and no heat is generated, we say that the collision is elastic. The word elastic probably came from the fact that when you stretch an elastic band, it will always go back to its original shape instead of being deformed.

To solve problems involving elastic collisions, we will need to assume that the heat generated is negligible. We can also use two marbles since marbles are not usually deformed permanently after collision.

We can consider a couple of cases. The two cases below assume that the masses of the marbles are equal. The other important thing to keep in mind is that no momentum is loss or gain during the collision. Instead, the momentum is simply transferred. In the example below, the blue ball will transfer all its momentum to the green ball. 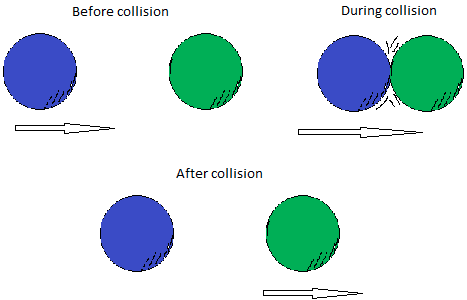 Notice that after collision, the blue marble is at rest while the green marble is now moving.

Case #2: Blue marble and green marble are moving toward each other. 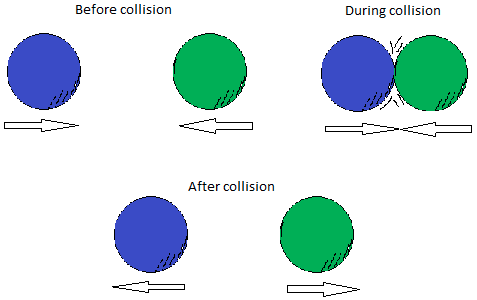 Notice that after collision both marbles move away from each other.

What are inelastic collisions?

In inelastic collisions, the objects colliding will be deformed or distorted. However, after they collide, they can either blend together to form a single unit or they can bounce off each other.

This usually happens during automobile accident. Sometimes, one car hits another car, gets stuck to that car, and keep pushing it for a little while before coming to a full stop. Other times, the collision is head-on and the cars bounce off.

Collisions usually occur with some external force. For example, billiard balls will not continue to move indefinitely after being given some momentum. Friction created by the table and the air will slow down the ball.

Now you are ready to solve some momentum and collisions word problems.