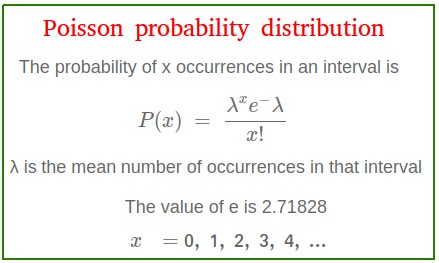 Suppose there is a power outage in an apartment complex 3 times a year. You may want to find the probability that there will be exactly 2 power outage next year. This is an example of a Poisson distribution problem.

In our example above we could extract the following:

Each power outage is called an occurrence. In order to use the Poisson probability distribution, the occurrence must be independent and random.

The power outage is independent. The next power outage does not depend on the one before. In other words, once a power outage has occurred, the next one is not influenced by any power outage that happened before.

Each power outage is also random. In other words, they do not follow any known pattern. There is no way to tell when a power outage will occur. They just happen randomly.

Occurrences always happen with respect to an interval as already mentioned in the formula. In our example of power outage, the interval in one year as opposed to being one month. This makes sense since we do not expect too many power outages unless we are living in a less developed country.

More examples to which the Poisson probability distribution can be applied