The different ways to write or define a set is called set notation. However, what is a set? Let us start with a definition of a set.

Basically, anything with a collection of objects is a set. Here is an example of set made with odd and even whole numbers less than 10.

You may now feel that you could easily make up our own sets.You could be surprised what a set could be made of. Basically, any collections of things that make sense.

This figure shows the set of even and odd whole number smaller than 10. 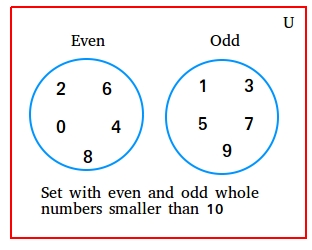 1. The set of all letters in the modern English alphabet.

2. The set of all great mathematicians in the past.

What is included in that set? We could mention names such as Carl Gauss, Isaac Newton, Einstein, Blaise Pascal, Euclid, Pierre de Fermat, etc...

3. The set of all positive numbers less than 10.

4. The set of all types of sausages.

What is included in that set? I am not sure since I am knowledgeable enough in this area. I know Italian sausage and ???. What else? Did I miss something?

5. The set of all states in the United States.

Oh boy. Geography! You know what? I think you got the point. Let us now explain what a set notation is.


Set notation or ways to define a set

a. You could define a set with a verbal description: All sets above are described verbally when we say, " The set of all bla bla bla "

Set-builder is an important concept in set notation. You must understand it!

We use capital letters such as A, B, and so forth to denote sets.

For example, you could let A be the set of all positive numbers less than 10.

Two sets are equal if they have exactly the same elements.

The order of elements in sets does not matter

A set is finite if you can list all its elements and infinite otherwise.

All sets described above are finite because you can list or count all their elements.

However, among the five sets, one set can be turned into an infinite set with one small change. That set is set number 3.

Set Notation Quiz. Check how well you understand this lesson.