Teachers usually teach the process once or never and usually have students use a calculator afterward.

If you want to understand how to get the square root without using a calculator, study the following example carefully!


Sorry, there are no shortcuts for this square root algorithm, so you will need patience before you master this algorithm! 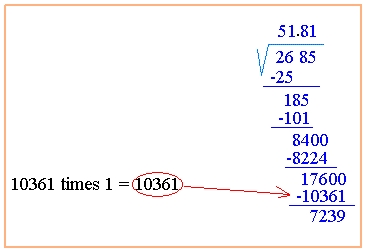 Square root algorithm to find the square root of 2685

First, always group the numbers in pairs starting from right to left and it is OK if there is only one number left in the leftmost position.

I will use a space to show that they are being grouped in pairs. In this case, we have two pairs of 2 numbers.

Subtract the square of the number on top that is 5 from the first pair.

Very important! : When you first start, you always take the square root of the pair or single number in the leftmost position. After that, you always double the number on top.

Bring down the next pair of numbers (85).

For the number 10, you will try to find a number you can put next to 0, which will also go next to 5.

Bring down a pair of zeros next to 84 to continue the process and put a decimal point next to 51.

For the number 102, you will try to find a number you can put next to 2, which will also go next to the decimal point.

Put 8 on top of the square root sign next to 102 and the decimal point.

Put 1 on top of the square root sign next to the decimal point.

I will stop here because it is a lot of work to put this square root algorithm here for you. Appreciate my effort? Look for the donation button below and please make a donation to keep this website running.

Feel free to continue the square root algorithm to get more decimal numbers, but I think I am done.

Notice that when you group the number in pairs starting from right to left, there will be only 1 number in the leftmost position. That number is 7 and that is fine.

Just start with 7 and say to yourself, " The square of what number is less than 7 and proceed an already outlined above.

I thought I said I was done. Why am I still talking about this square root algorithm?

Square root of a number