The tally numeration system is probably the simplest of all numeration systems ever used.It makes use of single strokes to represent objects that are being counted. One stroke is used for each object.

The figure above shows how we can use stroke(s) to represent the count for 1, 2, or 3 squares.

Disadvantages of the tally numeration system.


Although one advantage is simplicity, there are two disadvantages.

For example, can you tell what number is represented by the tally marks below?

I know what you are doing right now. You are using your finger to count the strokes perhaps.

However, would you be able to do that without confusing yourself or losing your place if there were 50 strokes? How about 1000 strokes? With 1000 strokes, perhaps you will not even bother yourself counting the number of strokes.

Anyway, if you did not lose your place when trying to count the number of strokes in the figure above, you must have counted 20 strokes.


How grouping made it a little easier to read numbers in the tally numeration system.

The introduction of grouping made it a lot easier to read numbers.

In this case, we place a fifth tally mark across every four strokes to make a group of 5.

The number shown above will be represented as follow:

Did you notice that you were able to find the number a lot faster?

How the tally numeration system is used in statistics.

A sample was taken of 30 high school students who were planning to go to college after graduation. The students had 5 choices.

The responses of the students are shown below:

To make a frequency table, use a table that has 3 columns and 6 lines. The first column on the left will have the 5 different majors. The second column in the middle will have tally marks. The last column will show the frequency as a number.

Read each student's response from the data above and mark a tally. 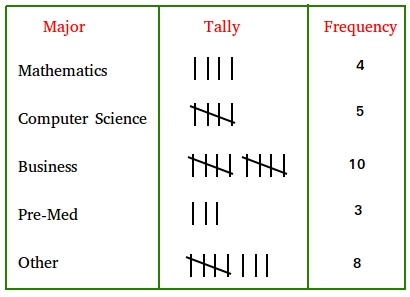