Variables in algebra are letters such as x, y, v, g, or call it any letter you want, that can be used to represent unknown numbers. 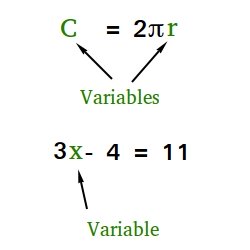 Basically, whenever we do not know the value of a number, we use a variable until we figure out what the number is. The variables that we often use are x and y with x perhaps being the most popular.

In the figure above, x is a variable in the equation 3x - 4 = 11 because we have no idea what the value of x is at the moment.

Let us figure it out.

Now that we know the value of x, we can replace it in the equation with 5.

Notice that x represents a variable that has a value that cannot change.

You may have recognized the equation C = 2πr. It is the equation that we use to find the circumference of a circle.

This equation has two variables and these are r and C.

Unlike x in the equation 3x - 4 = 11 that has a value that cannot change, r and C can take on values that can change.

This makes sense since the radius of the circle (r) can be any length.

The value of the circumference (C) will change based of the value of r.

How to graph variables in algebra

Once you know the value of a variable, you can graph it since all numbers can be graphed on a number line. Just locate the value on the number line and put a dot.

Just locate -6 on the number line and draw a circle at -6.

Just locate 0 on the number line and draw a circle.

Now, write a statement of equality for each of the following graphs. Use x as the variable.

How to write an algebraic expression