﻿Do the cars have the same average speed? How about velocity?

Since the cars make it at the same time, they must have the same average speed.

We know the cars are traveling in the same direction.﻿

However, just knowing the average speed is not enough information to conclude that the cars have the same velocity.

At some point, it is possible that the cars could have had the same instantaneous speed of 30 miles per hour. In this specific case, you can say that they had the same velocity.

1) The cars have the same speed since they are both traveling with a speed of 50 miles per hour.

2) The cars have different velocity since they are moving in opposite directions.

3) Each car has a constant velocity since the speed does not change while the car is cruising. Furthermore, the car is traveling in a straight line.

Therefore, after half an hour both cars will be 25 miles away.

5) The formula to get the speed  is

We need to find the time, so we must rewrite the speed formula.

By the same fashion,

However, if they maintain a constant velocity, they will meet half way or 5 miles. We know the speed is 50 miles per hour. 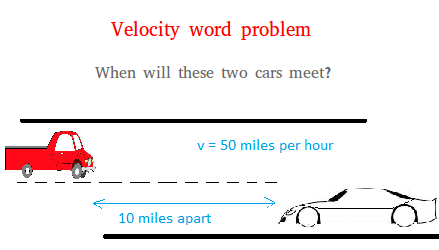 So the cars will meet in 6 minutes.

Problem #3: Your turn to solve a velocity word problem!
A car is driving on 95 south to go to New York that is 250 miles way. The car makes it to New York in 5 hours. Did the car have a constant velocity?

If you cannot solve this problem, try reading again the solution to the two velocity word problems above.