For the most part, information gets to us in the form of wave. This lesson explain wave motion or how waves transfer energy from one location to another. First, make sure you understand the meaning of medium and what a disturbance in the medium is. 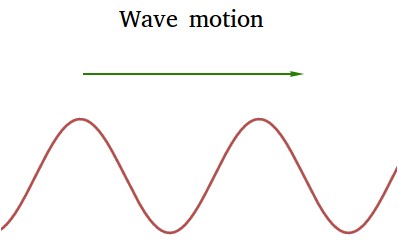 What is a medium in physics?

A medium is the means by which the wave travels. Examples of medium in physics are air and water. Sound for instance travels through air.

Disturbance in a medium

Whenever, there is a disturbance in the medium, energy is transferred from the vibrating source to a new location.

It is important to note that when energy is transferred to a new location by wave, there is no transfer of matter.

For example, when a loud sound from an apartment next door causes some items in your own apartment to vibrate, the air molecules did not move from the neighbor's apartment to yours.

The sound wave caused some items in your apartment to vibrate because of a disturbance in the medium or air.

Wave motion when water is the medium

What is a disturbance in water?

A domino effect is a good analogy to help you understand water waves or any other kind of waves.

A disturbance happens when one domino hits another domino. The first domino hits the second, the second hits the third, the third hits the fourth, and so forth until the second to last hits the last domino. Notice that the dominoes did not move significantly if it did.

Water waves work the same way. Water is made of molecules.

Pretend for a second that each domino is a water molecule.

Put all these oscillations next to each other, the result is a long wave.

The water molecules though did not move!

Wave motion when sound is the medium

Air is made of particles. The loud music creates a disturbance in the air.

How did the vibration get to an item in your room?

It is just like the domino effect already mentioned. It is a transfer of energy or oscillations from one particle to the next until this energy reaches the particles in your apartment.

And again if you put these oscillations next to each other from your neighbor's apartment to yours, it will look like a wave.

If the vibrations or oscillations in the particles in your apartment is strong enough, it can make items vibrate.

Frequency of a wave