Weight of an object

The weight of an object is easily and often confused with that of the mass. However, weight is not the same as mass. 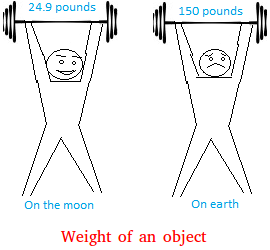 When you think of mass of an object, think of how much materials the object has.

When you think of weight, think of the gravitational force or downward pull of gravity on an object.

The reason for making a distinction between mass and weight is because gravity is not the same everywhere.

As illustrated in the figure above, if an object weight 150 pounds on earth, it would weight about 24.9 pounds on the moon.

It is clear now that an object can have the same mass yet has a different weight. If you could put the object somewhere in space where there is no gravity, the weight of the object will be 0.

Although an object may weight less somewhere else in the universe, you cannot get rid of the mass or the ability of the object to resist motion anywhere in this universe.

Weight of an object in relationship to the mass

Although weight is the force of gravity on an object, we cannot formulate a definition of weight without the mass.

We need both gravity and mass to come up with a formula.

Here is how to proceed:

It makes sense to use 9.8 because this is the acceleration of objects due to gravity.

We see that to get the weight, at least for objects on this earth, just multiply the mass by the acceleration.

a is the acceleration due to the gravity. When it is clear that we are talking about the earth gravity, a = g = 9.8

It is not always necessary to include the unit m / s2 in your math computation, but know it is there.