What are bow waves? 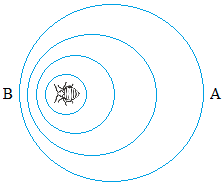 It has to be since the crests got ahead of the bug. Look how far behind the bug is from the first circle that was made or the biggest one!

Keep in mind that when a wave is formed, it is getting bigger and bigger although it is not quite apparent in the image above.

If the bug was trying to keep up with the the expansion of the circle, the bug will be close to the crest.

Now, what will happen if the bug try to keep up with the speed of the wave crests it makes? It will look like the following figure. 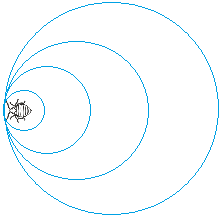 What if now the bug swims even faster than the speed of the wave?The bug will then leave behind the wave crests as shown in the next figure and these waves are called bow waves. 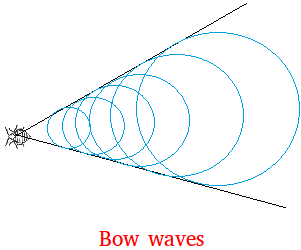 Notice that the overlapping circles make a V.