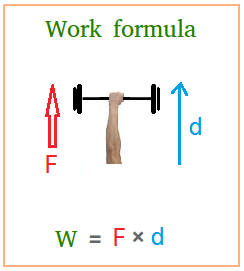 As you can see in the formula, work depends on the force applied to an object and the distance the object is moved.

In other words, whenever an object is moved (or displaced) because of the use of a force on the object, you do work against the object.

The formula for work above works only when the force is applied in the same direction as the displacement as shown above.

A great example of doing work is when we lift a load against the earth's gravity.

Notice the use of the word against. It is because to lift an object, you need to overcome another force.

When a strong guy who is doing bench press lifts a 400 pounds barbell above his head, he is doing work against the barbell or against the force or weight of the barbell.

The barbell usually goes up straight or vertically.

When a carpenter uses an iron jack plane to smooth out a piece of wood, he is doing work against force of friction on the wood.

d = 0 when there is no displacement or the object is not moved.


Therefore, if you hold an object and does not move it, no work is done on the object. And It does not matter if the object you are holding weight 200 pounds or more.

As we said before w = F × d only when the force is in the same direction as the displacement.

As you can see below, the arm of the man make an angle with the direction the truck is moving. The force is thus applied at an angle 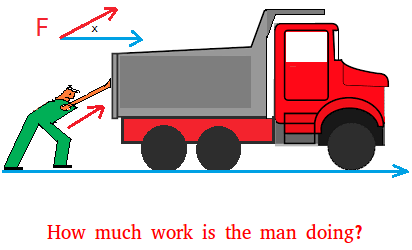 This makes sense since the man's arm will be in the same direction as the displacement of the truck.

If the angle between the force and the displacement is 90 degrees,

Plug in 0 in the work formula and the work is zero.

This means that the work is equal to zero.

This could happen if you apply some upward ( vertical ) force to keep an object in the air and you are moving (horizontally) with the object.

Suppose a man applies an upward force to keep a ball with a weight of 100 pounds in air at a height of 5 feet. He is also moving with the ball. In physics, the man is doing no work because the angle between the force and the direction the ball is moving is 90 degrees.

Force is measured in newton (N)

Distance is measured in meter (m).

1 joule is the work done when a force of 1 newton is applied to an object to move it a distance of 1 meter.

This work quiz will help you see if you understand the meaning of work in physics. After completing this quiz, you should be able to clearly see the difference between doing work and doing no work. You will not need to use a paper and pencil to complete this quiz.

My recommendation is to first read this lesson explaining what work is in physics and then take this quiz without using a calculator.