A list of some different types of forces that are encountered regularly in physics is shown below.

Definition: The normal force is the force exerted by a surface on an object.

Direction: Perpendicular to and away from the surface. 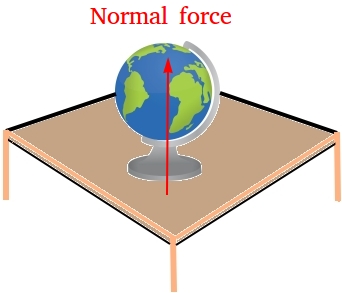 Definition: The frictional force is the force that resists sliding motion between surfaces.

Direction: Parallel to the surface and opposite the direction of sliding.

Example: You put a book on the floor and you kick it so it slides on the floor. The book will eventually stop sliding because of the force of friction.

Definition: The weight is the force caused by the gravitational attraction between two objects. Generally this force happens between the earth and an object.

Direction: Straight down toward the center of the earth. 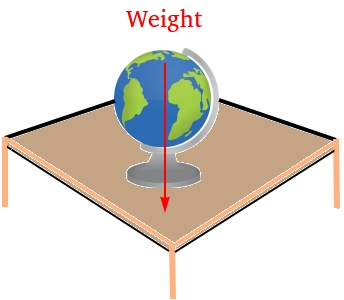 Definition: The tension is the pull exerted by a rope, cable, or string when attached to an object and stretched tight.

Direction: Away from the object or the point of attachment and parallel to the rope, cable, or string. 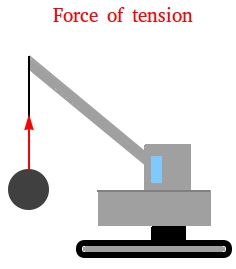 Example: Wrap a rope around a box and using your hand to drag the box with the rope. A tensional force will be created along the rope.

Definition: The thrust is the force that can move objects such as air planes, rockets, cars, or people.

Direction: Same direction as the acceleration of the objects.

Force of a spring:

Definition: The push or pull a spring exerts on an object.

Direction: Opposite the displacement of the object. 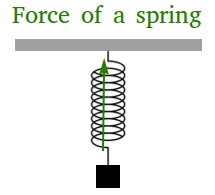 Example: A weight pulls down a spring. The spring pulls up with a force.

Summary of the different types of forces discussed in this lesson

What is a normal force?