If you put a weight on a table, the weight will press down on the table. The normal force is the force that pushes straight up on the weight. 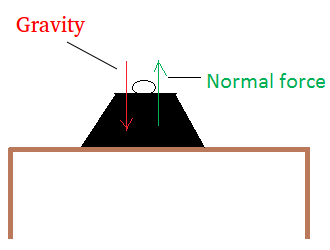 This type of force applies only to solid surfaces. It would not apply to a surface of a fluid. For instance, the force applied on the bottom of a boat or ship is not a normal force. It is called buoyant force.

The normal force is always perpendicular to the surface where the weight is applying some force. In fact, the word normal means perpendicular.

How to find the normal force 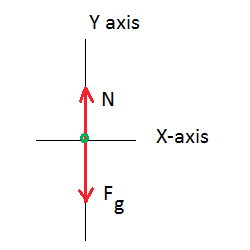 We can apply Newton's second law of motion to find the normal force.


You can then write an equation that represents the situation in the diagram. First, let us talk about the acceleration. Since the weight and the table are not accelerating, the acceleration is equal to zero.

A man with a mass of 100 kg stands on a table. How big is the force exerted on the man?

Solution: The force exerted on the man is the normal force.

We showed above that this force is equal to the mass times the acceleration of gravity.