Before showing you what an electric charge is, a discussion of what electrical forces are is important. Keep reading carefully! In the end, you will know why your finger received an electric shock when you touch a door handle.

Why don't you feel the effect of this pair of forces? You don't feel anything because the two forces balance each other.

In the end, you only feel the force of gravity.

Now that you are aware of the presence of electrical forces, where does these force come from?

The model of an oxygen atom is shown below. 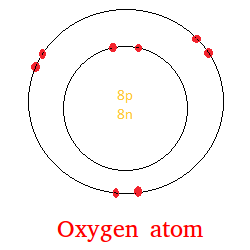 In an oxygen atom, there are 8 protons, 8 neutrons, and 8 electrons.

The 8 protons and 8 neutrons form what we call the nucleus.

The nucleus is surrounded by electrons and the electrons are shown in red.

The protons attract the electrons and hold them in orbit. However, electrons repel other electrons.

Under normal condition, there are as many electrons as protons in an atom. we say that the atom has a zero net charge.

If an atom happens to have more electrons or more protons, we call this phenomenon charge or electric charge. 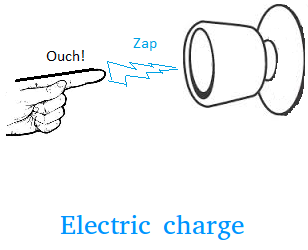 A neutral atom is an atom that has the same number of electrons as protons.

In the atom shown above, the 2 innermost negatively electrons are attracted a lot to the positively charged nucleus. However, it is not the same of the other 6 outermost electrons. They can easily be cut loose by outside forces.

If an electron is removed or lost, the atom is no longer neutral, it is electrically charged.

Rubber does not easily lose its electrons while this happen a lot easier with silk or human skin. We say that rubber has more electron affinity.

This happened because your body was not neutral, but negatively charged and the door handle was positively charged with less electrons.

The door handle wanted the extra electron(s) from your body.

As the extra electrons transferred from your body to the door handle, you experienced a tiny shock. This is an example of static electricity or electricity at rest since no wires are involved here.

It is important to note that electrons are neither created nor destroyed. Instead, they are just transferred from one material to another. This is the principle of conservation of charge.

Whenever objects carry a net positive or negative charge, there is an imbalance in electrical charge. As a result, electrical forces will arise that will either cause objects with this imbalance to either attract or repulse each other.

This electric charge quiz will test your knowledge of electrical force and charge.

After completing this quiz, you should be able to clearly see the difference between electrical force and electrical charge. You will also know how an electric charge is created. You will not need to use a paper and pencil to complete this quiz.

First, read the lesson here about electric charge and then take this quiz.