We call electrons that are free to move conduction electrons.

In the image below, we show a flow of electric charge so things can be crystal clear in your mind. The red arrows shows the direction.

At this point it may not clear why the electric charge flows this way. We can take a look inside the black wire to see what is going on. 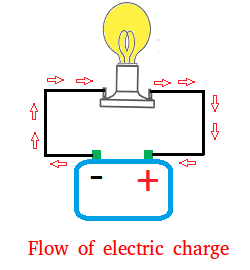 Basically, the wire is usually made up of two things. A piece of metal where the electric current will flow. An insulator that surrounds the metal to prevent someone from getting hurt. 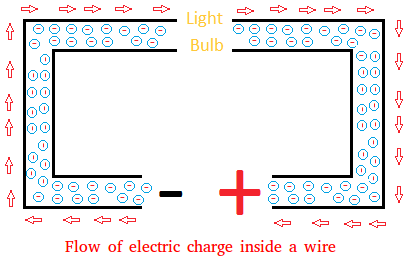 Recall that opposite charges attract each other. Therefore, the electrons in the conductor will be attracted to the positive terminal of the battery.

Now, you can clearly see why the flow of electric charge is shown this way in the first image.

The unit used to measure the flow of electric current is the ampere. The symbol for ampere is A. This is the unit you will most likely see in textbooks.

1 ampere is the electric current in 100-watt light bulb

That is a lot of electrons flowing inside a wire every second!