Experimental probability (EP) is probability based on data collected from repeated trials.

Example #1: A manufacturer makes 50,000 cell phones every month. After inspecting 1000 phones, the manufacturer found that 20 phones are defective. What is the probability that you will buy a phone that is defective? Predict how many phones will be defective next month.

The probability that you will buy a defective phone is 2%

Number of defective phones next month = 1000

Experimental probability is performed when authorities want to know how the public feels about a matter. Since it is not possible to ask every single person in the country, they may conduct a survey by asking a sample of the entire population. This is called population sampling. Example #2 is an example of this situation.

Let x be the number of people who love electric cars

The number of people who love electric cars is 95.7 million 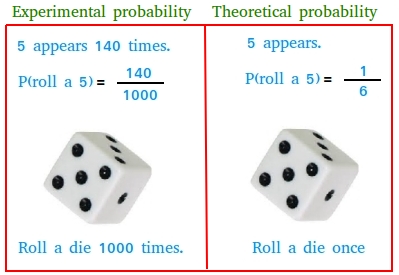 You can argue the same thing using a die. We will though use a coin to help you see the difference.

In theoretical probability, we say that "each outcome is equally likely " without the actual experiment. For instance, without  flipping a coin, you know that the outcome could either be heads or tails.  If the coin is not altered, we argue that each outcome ( heads or tails ) is equally likely. In other words, we are saying that in theory or ( supposition, conjecture, speculation, assumption, educated guess) the probability to get heads is 50% or the probability to get tails in 50%. Since you did not actually flip the coin, you are making an assumption based on logic.

In experimental probability,  we want to take the guess work out of the picture, by doing the experiment to see how many times heads or teals will come up. If you flip a coin 1000 times, you might realize that it landed on heads only 400 times. In this case, the probability to get heads is only 40%.

Your experiment may not even show tails until after the 4th flip and yet in the end you ended up with more tails than heads.

If you repeat the experiment another day, you may find a completely different result. May be this time the coin landed on tails 400 times or 300 times.

As you can see, experimental probability is based more on facts, data collected, experiment or research!