In order to understand the greenhouse effect, we need to understand how glass behaves when energy or visible light waves from the sun enter through the glass. Second, we need to see how temperature and wavelength are related.

Basically, you need to keep in mind the following important concepts.

To understand the last concept, think of a rope. Big wavelengths will form if you shake the rope with less energy or slowly.

Let us now see how these three concepts work together to cause the greenhouse effect. First, let us see what a greenhouse is.

What is a greenhouse?

A greenhouse is a house made with glass and it is used to grow plants. 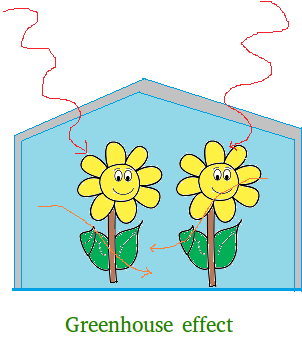 The visible light waves from the sun is shown in red. Notice that these waves are short and therefore carry more energy. Because of this fact, they are able to easily penetrate the atmosphere and the glass.

Since the wavelengths are longer, they carry less energy and are not able to escape as easily as they got in. Most of the energy is trapped inside making the house warm and create what we call the greenhouse effect.

Why is the purpose of a greenhouse? During the cold season, the greenhouse will keep the temperature inside as warm as possible. This will prevent the plants from dying.

This happens for the same reasons mentioned above. Short visible light waves easily pass through the glass windows of the car. Once they get inside these waves are absorbed and produce longer wavelengths that get trapped inside.

The greenhouse effect and global warming.

Global warming occurs the same way. The earth atmosphere is transparent to solar radiation. When this energy reaches the surface of the earth, the earth will radiate the energy back to the atmosphere with longer wavelength radiation. This is called terrestrial radiation.

However, atmospheric gas such as carbon dioxide and water vapor have the tendency to prevent long-wavelength radiation from escaping the earth atmosphere.

As a result, the earth is warmed up and the earth is a pleasant place to live. As you can see global warming is a good thing in this case.

There is a growing concern that this will create more and more global warming which can disturb the balance of the average temperature of the earth.

What is radiant energy?