What is radiant energy? 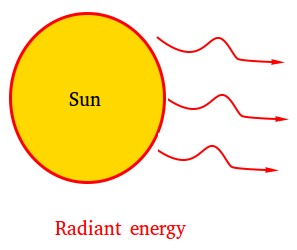 Radiant energy can include all the followings:

How does the sun transfer its radiant energy to the earth?

The sun transfers its energy or heat to the earth by means of radiation or electromagnetic waves.

There are 3 types of thermal transfer. These are conduction, convection, and radiation.

Convection does not work either since convection occurs only in fluid such as liquid or gas.

2. If an object becomes a little hotter than infrared waves, some of the energy it produces will be in the range of visible light such as the energy coming from a lightbulb.

Keep in mind that the sun and a lightbulb produce both infrared radiation and visible light.