This lesson provides a brief history of electricity. The usefulness of electricity is evident when you turn on the light at night or in many technological devices such as computers, cell phones, televisions, printers, and many others. However, how did we get there? 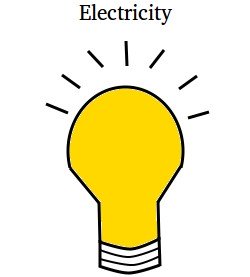 Electricity always existed in one form or another.

It is more accurate to say that men have found a way to harvest and process electricity in order to turn it to something more useful. Start your journey with a little history!

Men, such as the early Greeks all the way back to 600 BCE, were quite aware of electricity. One such Greek was Thales of Miletus. He experimented with amber and bits of straw.

An amber is a hard yellow or brown substance made from resin.

He discovered that if you rub a piece of amber, it will attract bits of straw.

In fact, the word electricity comes from electron and electron is derived from the Greek word for Amber.

These were modest discoveries, but the science of electricity and magnetism developed for centuries.

In the 1750s, Benjamin Franklin was the first to demonstrate with his famous death defying, kite-flying experiment that lighting is electricity.

He also helped us understand better the concept of insulation and grounding and this is used extensively today.

In the 1800s, Alessandro Volta created the Voltaic pile or cells.

In 1831, Michael Faraday discovered that magnetism could produce electric current in a wire. Before this discovery, the only way electricity was produced was with voltaic cells.

This discovery by Faraday changed the world because it facilitated the creation of nuclear power plant to power the world with lights.

In the early part of 1800, Humphry Davy created the first light bulb. He attached two wires to a battery and a piece of carbon between the wires. The carbon glowed, producing light although the carbon did not produce light for a long time.

However, in 1879 Thomas Alva Edison is credited with the invention of the light bulb.

Keep in mind that he did not create the first light bulb, but Humphry Davy did. However, Thomas Edison improved the light bulb to make it last over 1500 hours.

During the late 1800's, Charles Proteus Steinmetz became a big contributor in the invention of alternating current. This helped electrical companies to make further improvements with electricity.

In the 20th century, the progress continued with the invention of electronic devices such as radio, television, and computers.

This was just a brief history of electricity. Now, are you ready to see how electricity work? Take the journey yourself by starting with electric charge.