This is only a brief history of negative numbers. For a more comprehensive coverage and a longer reading, visit this site. For a concise, but right to the point introduction, stay right here with me.

Early writings of the Babylonians, Hindus, Egyptian, or Chinese do not contain any trace of the recognition of negative numbers.

Nonetheless, they had no problems doing correctly computations involving subtractions such as:


The first mention of negative numbers can be traced to the Chinese in 200 B.C.E.

In the fourth century, the Alexandrian mathematician Diophantus said in his text Arithmetica that the following equation is absurd.

He said this because x would have to be -4

In India, negative numbers started appearing around (A.D. 620-630) in the work of the Hindu Brahmagupta.

This means that the sum of two positive numbers is positive.

Around 1300, Chinese mathematician Chu Shi-Ku gave the "rule of sign"

In the 16th century, around 1545, the study of solutions of equations began in Italy.

During that time, he also clearly stated rules of negative.

History of negative numbers and the use of notation. 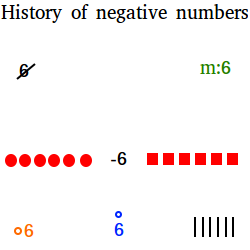 There has been various notations to represent negative numbers.

The Hindus put a small circle or dot over or next to a number to denote that it was negative.

The Chinese drew a slash through a portion of the number to indicate that the number negative.

For example, -1020 was written as shown below. Here, the slash is drawn over two bars or the number 2.


Cardano used the symbol m: for negative numbers. For examples, -6 can be written as m:6

The Europeans invented the use of the symbols + and - to represent positive and negative numbers.

Now that negative numbers are widely accepted, I do not know what we would do without them.

For more information on the history of negative number check, check this site.