Find here many important kindergarten math concepts taught in kindergarten. Teachers, parents, and math tutors can also use them as a guideline to illustrate a math lesson or to teach important skills.

Below
A figure is below something if the figure is located at the bottom of that thing.
Looking at the figure below, we see that the the bowl is located below the table.

Add
When we add 3 stars to 2 stars, it is equal to five stars.

Circle
A circle is a round plane figure. To illustrate the concept, show kids coins, bicycle wheels, pizzas, or pies.

Numeral
Students learn some ways to write down quantity.
A numeral is a symbol or name used to represent a number.
For example, 6, VI, and six are numerals representing the number 6.

Triangle
A triangle is a closed plane figure with 3 sides.

Addend
An addend is a number that is added to one or more numbers.
For example in 3 + 4 + 1, 4 is an addend.
There are three addends in the addition problem shown below.

Line
A line is a long small mark made by a pencil, pen, or another object. A line has two arrows. A line has no end on the right and on the left. This is shown with arrows.

The Ipad 2 is longer than the ipad mini.

The Ipad mini is shorter than the ipad 2. 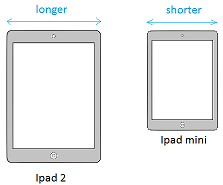 Sequence
A sequence is a list of numbers ordered in a specific way. For example, 2, 4, 6, ... is a sequence or list of numbers that is ordered by adding 2 to the previous number.
The next few numbers in the sequence below are 6, 7, 8, and 9.

Difference
The difference is the answer that you get when you subtract one number from another number. For example, the difference of 8 and 3 is 5.

Less than
For example, 3 is less than 9. Looking at the figure below, we see that there are less soccer balls than tennis balls.

Greater than
For example, 10 is greater than 4. In the figure below, there are more tennis balls than soccer balls.

Spheres
To illustrate the concept, show kids a soccer ball, marbles, or the Moon.

Examples of a cone
To illustrate the concept, show kids ice cream cones, or traffic cones.

Sorting shapes
Put things that are the same in the same basket.

Length
The length refers to how long something is. The length of the soccer ball is 2 units.

Quantity
Count the number of pencils one-by-one to get the quantity. If you count the pencils shown below, the quantity is 5.