Law of action and reaction on different masses

The law of action and reaction on different masses could be illustrated with the example of a ball dropped from a certain height.

There is an interaction between the ball and the earth.

We could also rephrase by saying the following. 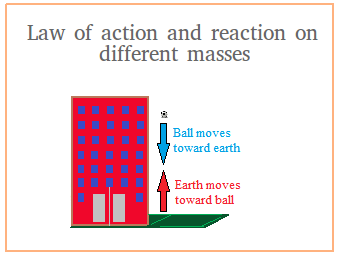 However, the distance the earth moves toward the ball is much less and too small to notice.

As a result, the earth's acceleration will be small.

We also need some basic fraction concepts here too to help you understand the concept. Suppose the numerator is the same. What happens when the denominator of a fraction is very big?

The fraction will be very small.

In fact, the bigger the denominator, the smaller the fraction.

Look at the two fractions below. The numerator is the same.

Even though the earth's acceleration is negligible, know that it is there and again it causes the earth to move a tiny bit toward the ball.

They collide with the same force, but the rock with the smaller mass will have a bigger acceleration.

The car hits back at you with a force of 200 N. You bounce back with an acceleration that is more than that of the car since you have a smaller mass.

c. A rifle fires a bullet.

The acceleration of the rifle is less than the bullet since the rifle has a bigger mass.