A good example of the third law of Newton is when you punch a wall (made with concrete blocks) real hard and you hurt your hand.

There are two things going on here although many people don't realize it.

#1:You punch the wall with a force

#2: The wall punches back at you with the same force.

Think of it this way. If #2 did not exist, then you would never hurt your hand.

Moreover, you actually did some damage to the wall as well although it could be insignificant. I think it depends on how strong you are.

The picture below illustrates what I just said. 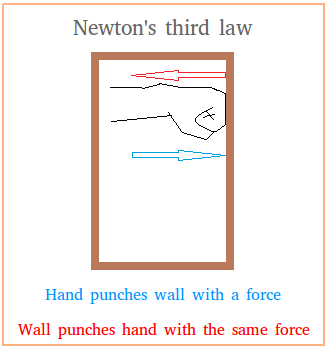 You hit the wall with a force. This force is shown with the blue arrow.

The wall hits back with the same force. This force is shown with the red arrow.

The third law of newton is also known as the law of action and reaction.

It does not matter which force is called the action force or the reaction force.

The important thing to keep in mind is that one does not exist without the other. Instead, they are coparts of a single interaction.

Other examples of the third law of Newton

b. Swimming: You push the water backward. The water pushes you forward.

Some action and reaction forces are not easy to identify as we shall see next.

c. What are the action and reaction forces when a car accelerates?

Most people will say that the engine is the action force. If that is true, then tell me why the car refuses to move when there is no friction or not enough friction such as when driving the car on an icy road?

In such situation, you can push the gas pedal as much as you like, the car will resist motion.

d. A ball is dropped from the third floor.

If you are having problems understanding this one, think of it as said below:

If X is pulling Y, Then Y is also pulling X.

But I don't see the earth moving!

A different lesson will show you why you don't see the earth moving!

Know that It does move, but only a tiny distance.