Find here in this lesson some easy and challenging net force word problems.

What is the net force on the airplane in the figure below?﻿

The airplane is moving with a force of 800 N. However, there are two forces moving in the opposite direction on the airplane.

The airplane will move with a force of 700 N as a result of air friction and wind. 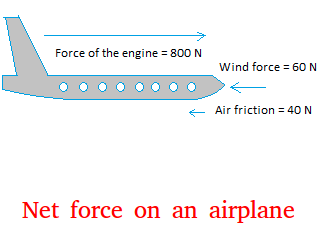 Problem #2: You and your brother are pushing a car with a dead battery with forces of 20 N and 25 N in the same direction. What is the net force applied on the car?

Since you are pushing the car in the same direction, the forces will be added together.

Who gets the toy?

What is the net force?

The sister gets the toy of course since she is pulling with a stronger force.

The rope will be in equilibrium is the net force is 0.

Let x be the force that must be applied by the second person on the left.

The other person should pull with a force of 100 N to keep the rope in equilibrium. 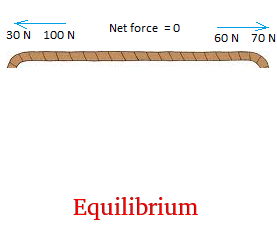 Your friend is pulling upward on an object with force of 3 N. You are pulling to the right with a force of 4 N.

Find the net force and the direction the object moves.

Just build the rectangle and find the resultant. The red arrow shows the direction the object will move.

This net force word problem is a little challenging. To find the net force, we need use the Pythagorean Theorem.

This net force word problem is a little challenging. To find the net force, we need use the Pythagorean Theorem.

What is a net force?