Whenever an object moves, it means that a net force is applied to the object. Why not just call it force? It is because more than one force can be applied to an object.

When more than one force is applied to an object, it is more precise to say net force or total force.

The unit of force is Newton. Near the earth surface, a mass of 1 kg has a force of about 9.8 N.

Look at the weight above and answer the following questions

1) How many forces are pulling this weight?

2) What is the total force?

3) Which direction will the weight go?

1) Three forces are pulling the weight. Each one is represented with an arrow pointing to the right.

Answer the same questions with the figure below:

Here are the answers if you could not figure it out.

1) there are still three forces pulling the weight. This time though, one force is pulling to the left.

The only force pulling to the left is 8 N.

3)  Since the stronger force is on the left,  the weight will move to the left.

What happens when the net force equals zero? 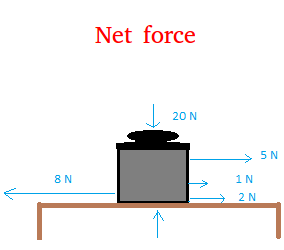 We put the weight on the table (shown in brown) and some forces are applied.

A total of 6 forces are applied. Let's break it down.

The object is pushing down on the table with a force of  20 N.

However, the table is pushing up also with a force of 20 N.

We call the force the table is applying support force or normal force.

Just because the table is not a human does not mean it cannot exert some force.

Put your hands on a table and push down. Why exactly is stopping your hand from going down?

It is the support force that the table is exerting on your hands.