In math, a palindrome is a number that reads the same forward and backward. For example, 353, 787, and 2332 are examples of palindromes.

How to find a palindrome using any given number.

Given any numbers, you can use the following simple algorithm to find other palindromes.

Call the number whose digits have been reversed new number. Add the new number to your original number.

Call the number found by adding the new number to the original number test number.

Does it sound complicated? However, it is really not that complicated! Let us illustrate with some examples.

132 is not a palindrome, so repeat the three steps.

We are done since 363 can read the same backward and forward!

We are not done since 807 is not a palindrome. Therefore, repeat the three steps.

We are not done since 1515 is not a palindrome. Therefore, repeat the three steps.

Now, here is your puzzle. Find 3 numbers less than 100 that require at least 4 additions to obtain palindromes.

Summary of the steps to find a palindrome

Hopefully, the examples above were easy enough to understand.  See the steps again in the figure below. 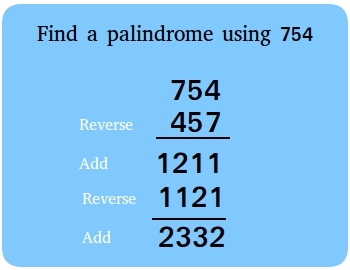 How to solve cryptarithms