A projectile motion is the motion or movement of a projectile after the projectile has been thrown in the air.

For example, if a basketball is used as a projectile, the path the basketball will follow could be illustrated as shown in the figure below. The blue curve shows the path of the basketball.

Looking at the path, you can see that the basketball will go upward for some distance, reach a maximum, and then, after a time turns and goes downward.

May be you were able to recognize this path as a parabola! 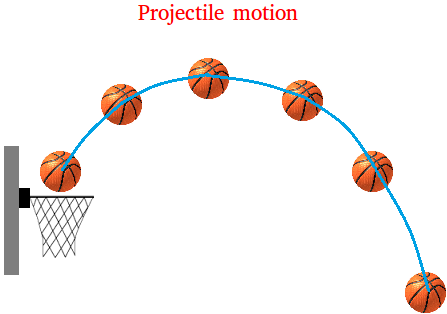 It really does not matter if the object is a basketball, a stone, an arrow, or a human cannonball. The path of any object thrown into the air is a parabola.

Next lesson will clearly explain and show why the shape is parabolic.

In the mean time, you may need to review the lessons about adding vectors since we will use the concept of adding vectors to show you why the shape of a projectile is parabolic.

The next thing to keep in mind is that a projectile motion is a motion in two dimensions.

When you drive your car, you can move only on a straight line, so this is a motion in one dimension.

However, after a projectile is launched, the projectile can go up and down and also move from left to right or from right to left. This is movement in two dimensions.

Although the projectile is moving horizontally as well, only the force of gravity will have an effect on the projectile assuming that we ignore air resistance.

An object can be thrown into the air the following ways.

Next, we examine the path of a projectile when the projectile is launched horizontally.

This projectile motion quiz will tease you brain and will clearly help you understand what a projectile is. You do not need to use a paper and pencil to answer the questions.

My recommendation is to first read carefully this lesson about projectile motion and then take this quiz without using a calculator.