The initial vertical velocity is of course equal to 0.

For, example, let's say that you launch a cannonball horizontally as shown in the picture below.

The cannonball will be affected by the horizontal speed and the vertical speed. 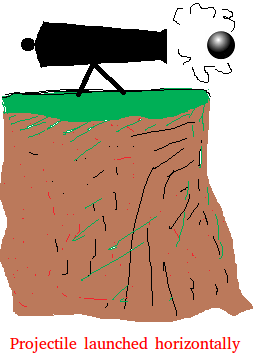 Below, we show constant velocity for the cannonball by using vectors that have the same size.

This means that the speed is not constant, but keep on increasing. Since the speed is increasing, the object will cover a greater distance in each successive equal time interval. Below, we show a speed that is increasing as the cannonball experiences free fall.

We can combine the vertical and horizontal movement/speed of the cannonball to see what we end up with. See below the horizontal speed, the vertical speed, and the resultant speed in red. The ball move along the green curve which is a parabola. The vectors shown in red (resultant speeds) are tangent to the green curve although it does not look perfect. 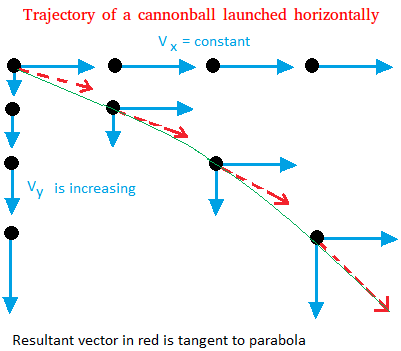 The path traced above in green is the path that a projectile will follow when the following conditions are met.

Next, we learn about the path and speed of a projectile launched at an angle.

First, read the lesson about projectile launched horizontally and then take this quiz.

Path of a projectile launched at an angle