Proof of the area of a triangle

Start with a rectangle ABCD and let h be the height and b be the base as shown below:

The area of this rectangle is b × h

However, if we draw a diagonal from one vertex, it will break the rectangle into two congruent or equal triangles.

Although it does make sense, the proof is incomplete because triangle ABC is a right triangle or what we can also call a special triangle.

How do we know the formula is going to work for any triangle, such as isosceles, equilateral, or scalene triangles?

If we can prove that the formula is the same for any arbitrary triangle such as a scalene triangle which has nothing particular about it, then it will work for special triangles such as isosceles, equilateral, or right triangle.

Here is the best way to show a proof of the area of a triangle.

Let us start this time with a scalene triangle ABC which has nothing special about it.

Then, draw the height from vertex B and label it as you see below:

Notice that y + x is the length of the base of triangle ABC.

Proof of the area of a triangle has come to completion yet we can go one step further.

At this point, most of the work is already done. All we need to do is to use a trigonometric ratio to rewrite the formula. 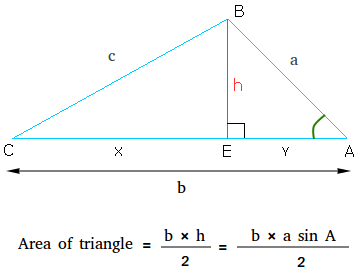 Substitute a sin A for h in the formula and we are done!

Proof of the area of a parallelogram