Rational numbers are any numbers that can be written as a fraction. In other words, you can rewrite the number so it will have a numerator and a denominator.

They have the form
a / b
in which a and b are integers and b not equal to zero.

Notice that we said b cannot be zero. It is because any number divided by 0 has no answer.

Examples of numbers that are rational are:


Now, why are 2 and 0 examples of such numbers?

It is because 2 and 0 can be written as

We can also write rational numbers as decimals.

We do this by performing a quick division that is dividing the numerator by the denominator.

Notice that you can continue division to keep getting zeros for the decimal places after 4.

The bar on top of 0 means that if we continue to perform long division, we will keep getting an infinite number of zeros.


Diving by 100 or any other power of 10 is a straightforward process.

If you are dividing by 10, just move the decimal point one place to the left.

If you are dividing by 100, just move the decimal point 2 places to the left.


Moving that two places to the left bring the decimal point right before the 4.

A decimal expansion in which the numbers repeat in exactly the same order.

A decimal expansion that ends in all zeros.

For example, 0.150 is a terminating decimal expansion. 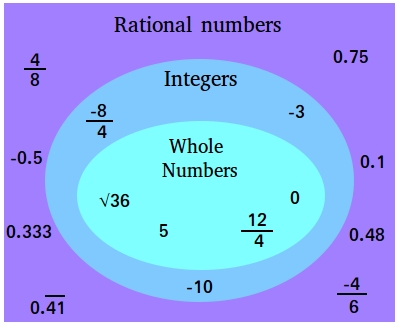 Test your understanding of this lesson with the rational numbers quiz below.