Irrational numbers include the square root, cube root, fourth root, and nth root of many numbers. Whenever a number is preceded with a radical sign, the number is called a radical. 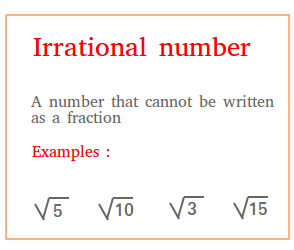 A radical sign is a math symbol that looks almost like the letter v and is placed in front of a number to indicate that the root should be taken: √
Not all radicals are irrational. For example, √4 is not an irrational number.


Why are the radicals above irrational? They are irrational because the decimal expansion is neither terminating nor repeating.

Take a close look at the decimal expansion of every radical above, you will notice that no single number or group of numbers repeat themselves as in the following examples.

There are basically no patterns!

The radicals above are not terminating. This means that the decimal expansion has an infinite amount of numbers.


We wrote only 7 digits after the decimal point. However, you can get more numbers.

Whenever a number is irrational, all we can get is an approximation. We can never write the number completely.


Difference between rational and irrational numbers.

How to find out if a radical is irrational

There are a couple of ways to check if a number is rational:
Example #1:


Find the following cube-root symbol on your calculator:

5 is terminating, so it is not an irrational number.

Find the following n-root symbol on your calculator:

Proof that square root of 5 is irrational