Relationship between degrees and radians

The number of degrees in one complete rotation is equal to 360 degrees.

In a complete rotation, the length of the intercepted arc is equal to the circumference of the circle or 2πr.

Dividing the equation 180 degrees  = π radians by 180 degrees or π gives the following conversion rules. 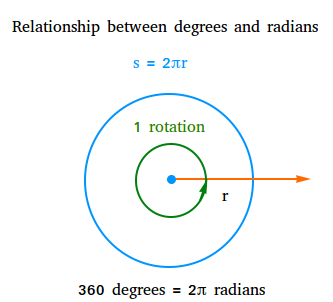 To convert radians to degrees, multiply radians by

To convert degrees to radians, multiply degrees by