How standing or stationary waves occur

A very common way to create standing waves is to use a rope. You can have someone hold one end of the rope at a fixed position or you can tie the rope to a wall.

The point is to make sure that one end of the rope is fixed in place or cannot move.

What will happen when you shake the free end up and down and creating a wave as a result?

Because the wall is too rigid to shake, the wave will be reflected back to you.

A standing wave is formed by combining the incident wave with the reflected wave. 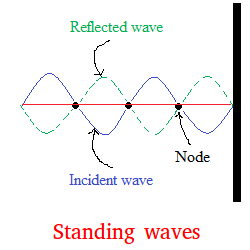 The red line is the resultant wave or standing wave. Since the incident wave and the reflected wave are out of phase with each other, the resulting wave is a straight line or a wave with zero amplitude.

A naturally occurring phenomena in standing waves is that certain parts of the rope will look like dots. We call these nodes and show them with black dots. Something important to keep in mind is that at these nodes, the string never moves.

Standing waves can also have amplitudes bigger than zero 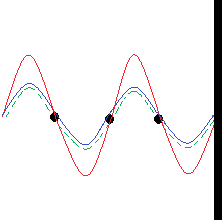 Halfway between adjacent nodes are antinodes. These are just positions with the maximum amplitudes. Here is a great and superb animation of standing waves.

I strongly recommend that you check this animation so you can fully visualize this phenomenon.