What is a capacitor?

What is a capacitor? A capacitor is a common device used in electricity to store electrical energy.

This electrical energy can then be released later in many ways.

What is a capacitor and how to build one?

To build a simple capacitor, we need the following materials:

The two conducting plates are needed plates so that electrons (or electricity) can move freely.

Furthermore, we need an insulator or something that prevent electricity to flow freely such as a thin sheet of paper to put between the plates.

The purpose of this insulator between the plates is to prevent the plates from touching. If the plates touch, negative and positive charges will come into contact and thus neutralize the electricity.

In a capacitor this insulator is usually called dielectric.

We also need a battery to charge the plates.

We then put the plates as close as possible to each other and we put the insulator between them. Notice that the plates are parallel. 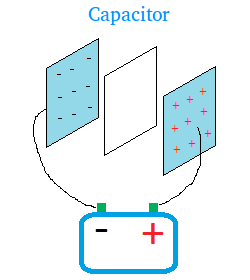 Now, let us see what happens when the plates are connected to the battery.

Then, these electrons will flow though the battery and through the negative terminal to the plate on the left.

Notice that the plates have equal but opposite charges

The final step is to sandwich the paper with the plates. After that, we roll everything up to save space and then insert the whole inside a cylinder. The end result is shown below. 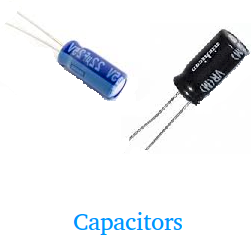 What is electric current?