What is a vector?

What is a vector? A vector is a quantity which has a magnitude and a direction. A vector will always give you the following two pieces of information.

If a quantity has only a magnitude, it is called a scalar, not a vector. Mass, volume, and temperature are all good examples of scalars.

A vehicle with a mass of 3000 kg is an example of magnitude or scalar.

A good example of vector is an airplane heading west with a speed of 150 miles per hour. This situation describes the airplane's velocity.

Therefore, the velocity is an example of vector.

In this case, the magnitude is 150 miles per hour and the direction is west.

You could also say that the airplane's velocity is 150 m/h due west.

Vectors are important because in physics, it is often useful to know not just the magnitude of things, but also the direction that those things are traveling as well.

What is a vector? Mathematical representation of vectors

There are more than one way to represent a vector mathematically.

Generally speaking, a letter (a capital letter or a lower case letter) in bold can be used to represent a vector.

For example, s, a, F, and S can all represent vectors.

If the letters are not in bold, then it refers to the magnitude only.

If the letters are not in bold and we put an arrow on top of the letters, then it refers to a vector. Below, we show 2 vectors.

You could also use two capital letters if you like. 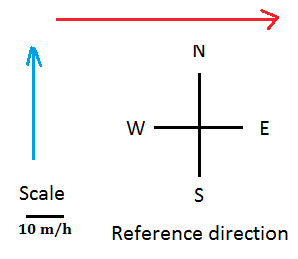 Above, we see two vectors. The black line is the scale. Three of the black lines is equal to the length of the blue arrow.

Therefore, the blue arrow represents a velocity of 30 miles per hour due north.

Six of the black lines is equal to the length of the red arrow.

Therefore, the red arrow represents a velocity of 60 miles per hour due east.

First, read carefully this lesson about what a vector is and then take this quiz.

What is a vector