A binary number system is a base-2 positional numbering system that was invented by Gottfried Wilhelm Leibniz in the 17th century. In the base-2 numeral system, the radix is 2 since only two digits, 0 and 1 are used to represent all possible numbers.

The two digits 0 and 1 are frequently called bits, a contraction of the words binary digits.

How to convert from decimal to binary

110012 is 25 as a decimal number. To convert 25 to the binary number system, we need to write 25 in expanded form while making sure that each addend can be written as a power of two. 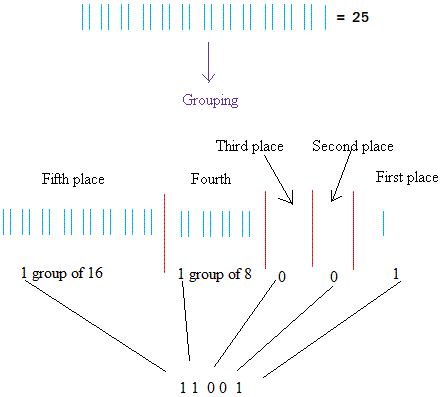 Notice that there are no groupings of two and four. As a result, put zeros in the second place and the third place.

How grouping is done in the binary number system. General guidelines to follow when converting from base 10 to base 2

Group from the nth place to the first place. This means that you have to create first a group with the highest possible power of 2.

For instance, I am trying to convert 45 to a binary number system. Ask yourself, "What is the highest power of 2 less than 45?"

Ask yourself, "What is the highest power of 2 less than 13?"

Ask yourself, "What is the highest power of 2 less than 5?"

Notice that you put nothing into the fifth place and the second place, so zeros go in those places.

Divide the dividend 25 by 2 and write the division algorithm.

Using method #2, here is how to convert the decimal number 25 into a binary number.

Write all the remainders obtained from bottom to top as 1100012

The main difference between the binary number system and our familiar base 10 numeration system is that grouping is done in groups of 2 instead of 10.

For instance, to represent 24 in base 10 using sticks, you could use two groups of ten and 4 as shown below.

There is something important though to keep in mind and this is the key to fully understand this lesson!

For example, carefully study the following number to see how it was organized. 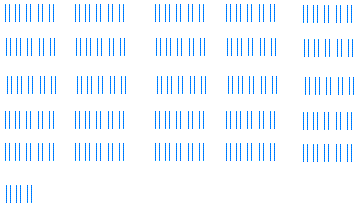 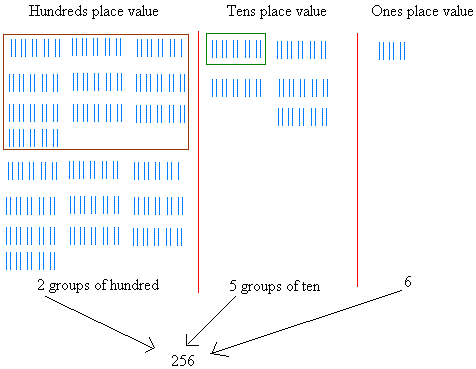 In a similar way, the binary number system has its own place value.

Since we are only using 0 and 1 to represent numbers, it will not be possible to write binary numbers using the number 2 or any number higher than 2.

Applications of the binary number system

The base-2 numeral system has many applications in computer technology. For example, every computer ever built stores data such as numbers, graphics, and letters internally using the binary numbering system.

In every computer, there is usually a maximum number of bits that are used to store integers. Nowadays, the value is usually 16, 24, or 32 bits. However, many of the computers made in the 1970s used only 8 bits to store data.

With an 8-bit computer, any operation on the computer that produces an integer value greater than 255 will create an error since all of the memory locations are used up. A 16-bit computer though can produce an integer with a maximum value of 65535. You can see why there was a need to create computers that can store more data.

For example, enter 45 in the calculator and you will see that the answer is 101101 as already shown above.