This lesson will help you see clearly the difference between insulators and conductors.

Recall that in the lesson about electric charge an atom is made of protons and neutrons called nucleus.

The nucleus is then surrounded by electrons. The model of two atoms are shown below. You need trillions and trillions and some more trillions of atoms to form a material.

When atoms come together to form a material, some of the outermost electrons or so most loosely held electrons are not attached to individual atoms. Therefore they can move freely as they wish.

When we say free to move we mean by that that the electron can move around in the same atom or jump to other atoms and move around.

The more electrons can move freely in atoms of a material, the better electricity can flow within this material.

Other examples of good conductors are water and humans.

It may come to no surprise to you that humans are good conductors!

Considering how easy it is for us to be killed by electricity, it is a no- brainer!

However, in some materials, electrons are not as free to move around. Instead, they are tightly bound to atoms. There materials are poor conductors of electricity. We call these materials insulators.

Some examples of insulators are glass, rubber, and porcelain.

Insulators and conductors in real life

A very good application of insulators and conductors is an appliance cord. 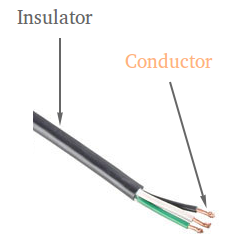 The metal where the black arrow is pointing is the good conductor. This is where electricity flow freely sometimes several meters.

The metal is wrapped with insulators shown in white, black, and green.

Although the thickness of the insulation is small, it is still preventing

electricity from flowing across.

Some materials such as silicon and germanium are semiconductors.

Many electronic devices that we use extensively today are made with materials that can behave as a conductor and insulator at the same time. Transistor is an example of semiconductor.

Even good conductors tend to resist the movement of electrons or the flow of charge.

In some materials, however, called superconductors, the resistance is equal to 0. If a current is set up in a superconductor, electricity will continue to flow indefinitely or "forever" with no battery or other source of energy needed to maintain it.

First, read carefully this lesson about insulators and conductors and then take this quiz.