These two law of sines problems below will show you how to use the law of sines to solve some real life problems.

The biggest trick is this problem is to understand the meaning of N52°E and N36°W.

Here is what the graph will look like after you draw it. 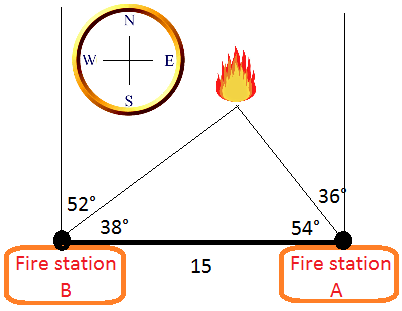 Notice also that the angle opposite 15 is missing, so we need to find it.

Now, we can use the law of sines to find the distance the fire is from station A.

Let x be the distance from the fire to station A.

The leaning tower of pisa is inclined 5.5 degrees from the vertical. At a distance of 100 meters from the wall of the tower, the angle of elevation to the top is 30.5 degrees. Use the law of sines to estimate the height of the leaning tower?

The trickiest thing here is making the graph. We show it below. Notice that the height is shown with a green line. 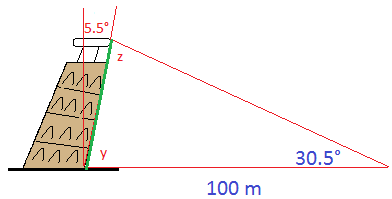 Now, we can use law of sines.

In reality, the height of the leaning tower of pisa is 55.86 meters