What does friction mean?

What does friction mean in physics? Simply put, friction is the force that prevents objects from moving or prevent objects from remaining in movement once they start moving.

For example, friction prevents the man below from moving the cardboard box. 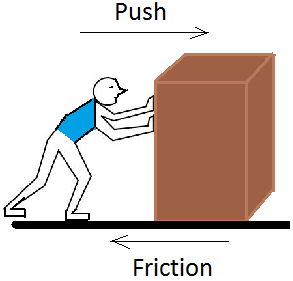 You may not be aware of it, but friction is necessary for some daily activities.

For example, if friction did not exist, you would not be able to drive your car to work or to the supermarket.

To understand this, try driving your car on ice where friction is small.

How does your car react as you step on the gas?

The tire rotate yet your car does not move much. Or it may not move at all!

This happens because the friction between your tire and the ice is small.

The worst thing that can happen to you is when the road is icy after it has been snowing.

You step on the break yet the car keeps moving until you rear-end another car.

The car does not have a mind of its own. It is the lack of friction between the ice and the tire that is playing trick on you.

Rubber against concrete produce great force of friction. You guessed it! That is why tire is made with rubber and some roads are made with concrete.

Put a book on a floor and give it a big push. What does friction mean in this case? The book will move for a short period of time and then friction will cause it to stop.

It is the force of friction that made the book stop.

Going back to the man pushing the cardboard box, what happens when the man pushes with great strength and the box still does not move?

In fact, the word 'static' means fixed, unchanging, or not moving.

fs can have a maximum value written as fs, max

This maximum static frictional force is given by fs, max = μs × N

μs is the coefficient of static friction.

N is the magnitude of the normal force on the body from the surface.

However, if the man pushes with all his strength and the box moves,

μk is the coefficient of kinetic friction.

Friction on an inclined plane