What is a neutral atom?

An atom is the smallest particle of an element that can be identified with that element. Still confused?

Don't worry! We will break it down and help you understand with a concrete example.

A piece of pure gold for example is an element.

Break this piece of pure gold into billions of smaller pieces until the texture feels like powder of fine gold. 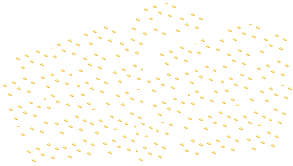 Wait! This is still not small enough to call it an atom. Each tiny piece of fine gold is composed of many billions smaller pieces called particles.

As we said in the definition, the smallest among these particles is called an atom.

You can still use this extremely small piece that you cannot even see at this point to identify the element which is in our case gold.

Atoms are too small to be seen with visible light. The reason we cannot see an atom has to do with the wavelength of visible light.

Using the highest magnification available, it is possible to see a particle that is larger than the wavelength of visible light.

In 1981, a major breakthrough came with the invention of the scanning tunneling microscope. You can now see individual atom with greater details.

If you studied an atom with this device, you will see that an atom has 3 subatomic particles called electrons, protons, and neutrons.

The exception to this rule is the hydrogen atom which only has 1 proton and 1 electron.

What is a neutral atom then?

Now that you got the big picture, you are ready to know what a neutral atom is. The picture above represents an atom.

Protons and neutrons form together the nucleus.

The electrons surround the nucleus.

Atoms are therefore neutral in their normal states. Under some circumstances, atoms can lose or gain electrons. In this case, they are no longer neutral. They now have a charge. This lesson about electric charge explain this in details.

Other examples of neutral atoms. 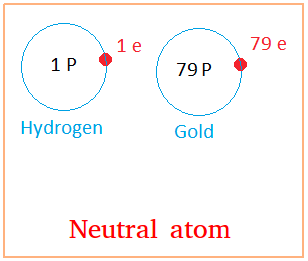 When an atom is not neutral, it is called ions. A couple of examples of ions are shown below.

What is a neutral atom?

Take the atom quiz below to see how well you understand the atom. After completing this quiz, you should be able to clearly see the difference between a neutral atom and an atom that has an electric charge.

You will not need to use a paper and pencil to complete this quiz. First, read this lesson about neutral atom and then take this quiz.