Here are the steps to follow when solving with the elimination method.

Try to eliminate a variable as you add the left sides and the right sides of the two equations.

Solve for the variable that was not cancelled or eliminated.

Use the answer found in step 3 to solve for the other variable by substituting this value in one of the two equations.

First, read the example in the figure carefully and then keep reading to see more detailed explanations on how to solve using the elimination method 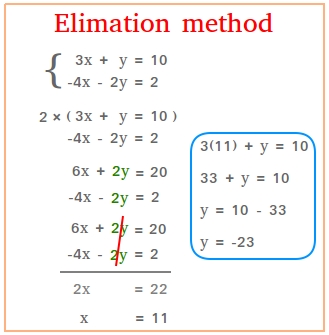 Examples showing how to solve a system of linear equations by elimination using the 4 steps outlined above.

Examine the two equations carefully. After a close examination, notice that you can eliminate or cancel the variable y by adding the left sides (x + y and x − y).

However, since you are adding the left sides, you have to add the right sides (20 and 10) of the two equations also to keep the equation balanced.

Therefore, turn y into 2y by multiplying the whole equation by 2

You should have noticed that the reason we call this method the elimination method is because the first thing you do is eliminate a variable.